Science in the Arab world acquired a prominent role, but not only science, but the application of technology for the development of various mechanical devices and devices, as demonstrated by the frequent appearance of automata, sometimes in their literature and usually as toys and curiosities among the upper classes of society.

And if there is a field where those automata spread, it was in the clocks field. Clepsydras (water clocks) and automatons were built from the ninth century. The clepsydrasthat Azarquiel created in Toledo, next to the Tagus, in the 11th century, were famous. They recorded the passage of the hours and phases of the moon; during the first 14 days of the month the containers filled with water at a constant speed, also emptying at a constant rate in fourteen seconds.
But apart from these hourglasses, these clocks served for the construction of authentic mechanical shows.

THE AUTHOMATIC ORCHESTRA OF AL-JAZARI

The first examples of known automata appeared in the Islamic world in the 12th and 13th centuries. Its sophistication stands out for those created by the Arab inventor Al-Jazari, who in 1206 describes some of his most notable creations: an automatic wine pourer, a dispenser mechanism for soap and towels, and an automaton-orchestra that operated thanks to force of the water. The latter was intended to entertain parties and banquets with music while floating in a pond, lake or fountain.

When flowing, the water started up a rotating drum with pegs that, in turn, displaced levers whose movement produced the different sounds and movements. Since the pegs responsible for musical notes could be exchanged for different ones, with the aim of interpreting another melody, it is considered one of the first programmable machines in history.

On December 30, 1362, Mohammed V wanted to celebrate his restitution to the throne by taking advantage of the festival of Mallid al-Nabawi giving a treat in the Throne Room of the Palace of Comares of the Alhambra that would begin after the sunset prayer and extend until the of the dawn, to which all the Jassa or Nasrid nobility and representatives of the main institutions of the kingdom would attend.

During the evening a musical and literary program was developed, interspersed between the three obligatory prayers, and to count the time during the night a horologio, minkana or mankana was built expressly for the occasion, which placed on a pedestal, excited the curiosity of the illustrious attendees to the celebration

Ibn al-Jatib describes the artifact in his work Nufada III (of which two copies are preserved, one in Casablanca and another incomplete in the University of Leiden, in the Netherlands), a horologio to count the hours of hollow structure in wood , light for easy transfer, triangular in shape with twelve sides and a height of approximately 1.70 meters, at the top of which was placed a candle that has marked the night hours. On each of the twelve sides of the wooden structure there would be a cavity containing a copper ball the size of a hazelnut. Each of these cavities had a small door closed by a latch attached by a string to each of the marks of the hours of the candle or candle. When the candle is lit, the flame consumes the wax and when it reaches one of the marked hours burns the string that holds the latch of one of the doors that opens and drops the ball to a metal plate, producing a metallic resonance that warns after an hour. 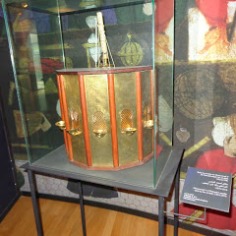 Behind the small door, a figurine presented a piece of paper written with short poems of ten verses referring to the time, the Koran and the feast that was commemorated, and a panegyric of praise to the Nasrid king

The person in charge of the horologio went up a staircase to the mill, gave the muslim or reciter the piece of paper of the corresponding hour so that he could read it out loud to the guests.

Another Andalusian, Ibn Jalan al Muradi, of the eleventh century, wrote a treatise on automata, the “Kitab al-asrar”. In it he describes, among other clocks with automatons, the so-called Clepsydra of the gazelles, where, under a palace pavilion and a garden, there is a mechanism with a mercury tube and two scales, whose containers are filled with water alternately, causing a sequence of movement in the figures of automatons: there are girls who go out to the garden of the palace to contemplate the gazelles drinking. A hidden servant appears to watch the young girls spy, but snakes immediately emerge to defend them. The gazelles cease to drink, the young flee to the pavilion, the crayons stop drinking, the young flee to the pavilion, the servant turns to the well and the serpents hide.

It is a magnificent show in which a whole scene unfolds. The Andalusian scientists were not only great theoreticians but also great engineers.