Ir al contenido
-Education was universal in Moorish Spain, available to all, while in Christian Europe ninety-nine percent of the population were illiterate,and even kings could neither read nor write. At that time, Europe had only two universities, the Moors had seventeen great universities!. These “Madrazas” were located in Almeria, Cordoba, Granada, Jaen, Malaga, Seville, and Toledo.
– In the tenth and eleventh centuries, public libraries in Europe were non-existent, while Moorish Spain could boast of more than seventy,of which the one in Cordova housed six hundred thousand manuscripts. 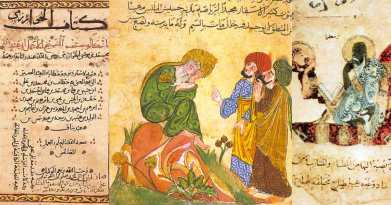 – Over 4,000 Arabic words and Arabic-derived phrases have been absorbed into the Spanish language. Words beginning with “al,” for example, are derived from Arabic. Arabic words such as algebra, alcohol, chemistry, nadir, alkaline, and cipher entered the language.Even words such as checkmate, influenza, typhoon, orange, and cable can be traced back to Arabic origins.
– The most significant Moorish musician was known as Ziryab (the Blackbird) who arrived in Spain in 822. The Moors introduced earliest versions of several instruments, including the Lute or el oud, the guitar or kithara and the Lyre. Ziryab changed the style of eating by breaking meals into separate courses beginning with soup and ending with desserts.

-The Moors introduced many new crops including the orange, lemon, peach, apricot, fig, sugar cane, dates, ginger and pomegranateas well as saffron, sugar cane, cotton, silk and rice which remain some of Spain’s main products today.
– The Moorish rulers lived in sumptuous palaces, while the monarchs of Germany, France, and England dwelt in big barns, with nowindows and no chimneys, and with only a hole in the roof for the exit of smoke. One such Moorish palace ‘Alhambra’ (literally “the redone”) in Granada is one of Spain’s architectural masterpieces. Alhambra was the seat of Muslim rulers from the 13th century to the end of the 15th century. The Alhambra is a UNESCO World Heritage Site
-It was through Africa that the new knowledge of China, India, and Arabia reached Europe. The Moors brought the Compass from China into Europe.
– The Moors ruled and occupied Lisbon (named “Lashbuna” by the Moors) and the rest of the country until well into the twelfth century.They were finally defeated and driven out by the forces of King Alfonso Henriques. The scene of this battle was the Castelo de Sao Jorgeor the ‘Castle of St. George.’